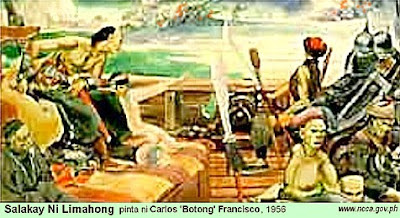 1574 - Chinese warlord and pirate Limahong leaves  Manila northward for the province of Pangasinan, establishing a kingdom near the mouth of the Agno River in the southeast Asian islands of the Philippines after  having been foiled in his plan to establish his own kingdom at Manila; Limahong, who managed to  become leader of some two to three thousand pirates and commandeering  as much as 95 ships  and has been wanted by the Chinese authorities;  Limahong invaded the northern Philippines a year earlier to escape the pursuing Chinese authorities,  first settling in Ilocos Sur before later attempting to invade  the relatively new and unprotected Spanish colonial  settlements in Manila.

Posted by Jesusa Bernardo at 11:30 AM