1859 - Future Filipino revolutionary  leader Juan Faller Climaco is born in  Cebu City; Climaco, who will be orphaned in his adolescence and will inherit his parents' riches and  businesses, will join the Philippine Revolution against Spain following the arrival of the followers of Katipunan Supremo Andres Bonifacio (Gil Domingo  and Hermogenes Plata) in Cebu on a mission to enlist the Cebuanos' support for continued Filipino resistance against Spain; Climaco, who will take up the cudgels of revolutionary leadership in Cebu along  with Arcadio Maxilom following the traitorous death of Pantaleon  Villegas, will be noted for the letter  he will pen in behalf of Cebuano revolutionaries during the subsequent  Filipino-American War (1899-1914)and defiantly addressed to the imperialist  United States Congress which will conclude: "We further express to you that we gladly accept the temporary protection of your country, but as to its sovereignty, never." 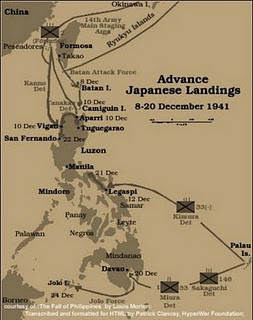 1941 - The Japanese attacks Jolo, Sulu island in the southern part of the  American colony in Southeast Asia, the Philippines, during the Second World  War; the entire province of Sulu, which is important as staging area for the Japanese invasion of North Borneo, succumbed to the forces of Asia's giant; owing to the corollary brutality of the Japanese who will initially  execute Chinese residents of Jolo in  retaliation for their support for Chinese resistance against the Japanese invasion in China, a number of fragmented secret armed groups will be organized until a Tausug, Abdulrahim Imao, founds a guerrilla outfit that will form the nucleus of effective guerilla resistance against the Japanese.

Posted by Jesusa Bernardo at 11:58 AM