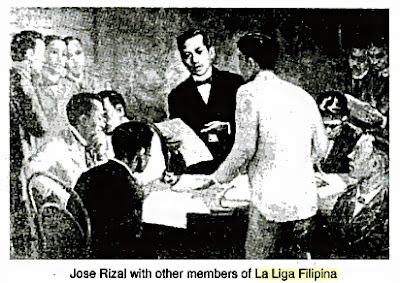 1892 - Filipino patriot and polymath Jose Mercado Rizal founds the La Liga Filipina, a secret civic society  aiming to promote social betterment, mutual protection, and solidarity of Filipino natives during the Spanish Colonial era; realizing the futility of their decade-long propaganda campaign for political reform mainly as exiles and expatriates in the 'mother' country, Rizal and other patriots inaugurate the La Liga at the house of Doroteo Ongjuco in Ilaya St., Tondo, Manila, with its bolder reformist aims seeking the natives' direct involvement; having the motto "Unus instar omnium" or "One for All," the La Liga's membership is at least initially dominated by the educated and wealthy Filipinos, with Ambrosio Salvador, Agustin dela Rosa, Bonefacio Arevalo, and Deodato Arellano as officers; Rizal has returned to the Philippines from Europe to found the society but will soon be arrested and exiled to Dapitan by Spanish officials who consider the La Liga's objectives dangerous; Rizal's arrest would soon prompt the founding of the secret society Kataas-taasang, Kagalang-galangang Katipunan ng mga Anak ng Bayan (KKK)  aiming  to completely sever ties with colonial Spain by a group of radicals including Andres Bonifacio y de Castro who would nonetheless greatly work to organize La Liga chapters in various Manila districts before its eventual dissolution within several months.


1899 - Five months into the Filipino-American War (1899-1914), the fledgling Philippine Republic under Gen. Emilio Aguinaldo issues paper currency in  denominations of one, two, five, twenty, fifty and hundred pesos, with future autonomist  [collaborator for American rule]  Pedro A. Paterno, among others, being empowered to sign them jointly or severally; banknotes, with those bearing serial numbers signatures to be rarely issued as they are circulated along with 2 centimos de peso copper coins, are printed amidst the Filipinos' determination to assert their new-found independence from former Spanish colonial rulers against the invading imperialist forces of the Bald Eagle nation.