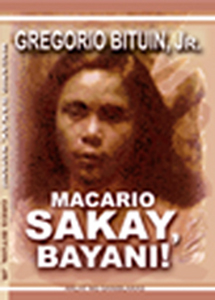 1907 - Gen. Macario Sakay, one of the Filipino military leaders who had continued fighting the imperialist United States invaders eight years into the Philippine-American War (1899-1914), is meted out the death sentence; essentially based on the ideals and principles of the underground-society-turned-revolutionary-government Kataastaasang, Kagalanggalangang Katipunan  nang manga Anak nang Bayan (KKK) during the Philippine Revolution against Spain,  Sakay had established the Republika ng Katagalugan (entire Philippines) with a popularly backed guerrilla operations in Morong, Laguna, Cavite and Quezon in patriotic defiance of the colonial American government, was deceived by colonial Gov.-Gen. Henry Clay Ide who made it appear that Sakay's  his surrender was necessary to give way to the election of an all-Filipino Philippine Assembly legislature, falsely promising him and his supporters amnesty; upon his deceptive abduction by the imperialist Bald Eagle authorities, Sakay could only exclaim to Dominador Gomez, the Filipino collaborator who helped in his trickery: "“Tell the Americans to face us in the open field, in honorable battle.”

1898 -  Generals Artemio Ricarte and Pio del Pilar express their misgivings to President Emilio Aguinaldo y Famy as to the real nature of American policy towards the Philippines; this as Aguinaldo issues a proclamation to the United States and all foreign governments explaining the nature and scope of the Revolutionary Government and the proclamation of country's independence by provincial representatives, begging for the protection of all nations of the civilized world and beseeching their formal recognition of the state of belligerence and the independence of the Philippines;” by February 4 the following year, the imperialist-in-the-making Bald Eagle nation will instigate the bloody and protracted Filipino-American War (1899-1914) and will eventually successfully invade and occupy the Southeast Asian nation until 1946 when it will "grant" the Philippines independence (but not before ensuring its neocolonial status through through agreements and  treaties aimed at manipulating and controlling Filipinos' political and economic lives.

Posted by Jesusa Bernardo at 2:30 AM No comments:

1946 - The Congress of the Philippines ratifies the Treaty of General Relations entered into by and between the Republic of the Philippines and its former colonizer, the United States, on July 4, 1946; the Treaty with the Bald Eagle nation is crafted in such a way that it makes room for arrangements that allow continued imperialist American military, political and economic hold on the Southeast Asian archipelago, as  to be expressed in the 1947 Parity Amendment in the 1935 Constitution giving US citizens equal rights with the Filipinos in the exploitation of Philippine natural resources, and the 1947 Military Bases and Military Assistance pacts allowing U.S. access to 22 military, naval, and air bases in the Philippines (which were to be superseded by the Mutual Defense Assistance Agreement and the Mutual Defense Treaty)  the General Relations treaty will become a subject of continued controversy and criticism, dubbed as a neocolonial arrangement by Filipino nationalists, including foremost nationalist of the period Claro M. Recto: the US will initially arrogate to itself the title over the base lands but following criticism by Recto who will state that American right over the base territories is only "just utendi" and that the subsequent Bases Agreement  only a 'lease,' the US will later formally deliver the base lands' muniments of title to the Philippines through then US Vice-President Richard Nixon.
Posted by Jesusa Bernardo at 2:30 AM No comments:

1625 - Gov. Fernando de Silva, appointed successor to  Gov. Alonso Fajardo de Tenza in colonial Philippines,  notifies King Philip IV of Spain of his arrival in the  islands and reports the condition of affairs, including:  his recommendation for the restoration of the captive Ternatan king; his intent to very severely punish the  rebellion in Cagayan; abandonment of the attempt at  working the Igorrote gold mines; request for greater  authority to restrain the lawless religious who ignores  the civil authorities; and his hope to obtain the  needed ships to defend their Philippine possession  against the powerful Dutch fleet that has actually already reached Ternate.

1898 - Some nine days prior to the infamous Mock Battle of Manila that would falsely make it appear that the Americans, instead of the Filipino revolutionaries, defeated the Spanish colonial forces in the Southeast Asian archipelago and the capital, Manila, Consul Oscar F. Williams of the emerging imperialist United States cables American Secretary of State William R. Day to report that he has tried to convince Gen. Emilio Aguinaldo y Famy that American rule over the Philippines will supposedly bring greater honor, progress, and profit to the natives compared to any scheme the Filipino leader and his advisers can ever devise; Williams adds that he is on better terms with Aguinaldo than the United States military commanders are with Aguinaldo, the leader of the second phase of the Philippine Revolution who has stupidly forged an "alliance" with U.S. Admiral George Dewey and believed his and other American military and diplomatic officials' verbal deceptive promises that the Bald Eagle nation will honor Philippine independence; apparently realizing that the imperialist Americans have him duped, Aguinaldo--who weeks earlier even ridiculously instructed his men to allow the G.I.'s to freely enter the archipelago--will then try to 'negotiate' Filipinos' independence; the Mock Battle of Manila will form the prelude to the baseless December 1898 Treaty of Paris where by that time, the virtually expelled Spaniards will supposedly "cede" the Philippines to imperialist America, ultimately leading to the bloody and protracted Filipino-American War (1899-1914).
Posted by Jesusa Bernardo at 2:30 AM No comments:

1900 - One and one-half years into the protracted and bloody period of American  invasion (Filipino-American War, 1899-1914), the President of the Philippine  Republic-on-the-run Emilio Aguinaldo issues a  manifesto wherein he appeals to the Filipinos  not to listen to  native collaborators but, rather, to continue fighting without end in defence of their rights until victory against the imperialist enemy is achieved and independence won and recognized. 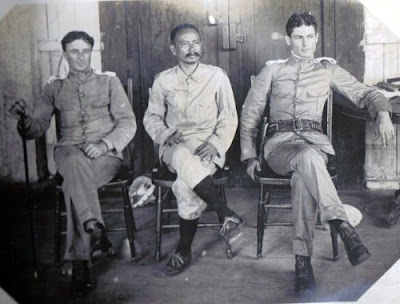 1901 - exactly a year later, following the capture of several officials and their subsequent swearing of  fealty to the imperialist Bald Eagle nation, including Aguinaldo,  Gen. Ambrosio Mojica, Gen. Vicente Lukban of the Samar-Leyte command issues a  proclamation, part of which says:


"Nothing, in truth,  is more natural than that we should continue the  struggle, whatever be the obstacles placed in our way  and despite the capture of him who was our  generals;… We should let the world know that the  Philippine army is captured, another at once comes  forward and succeeds him; that we fight, not at the  suggestion of others, but because of our own personal  convictions; and that, finally, we are worthy of  independence and of universal respect, because we  know our rights and how to die in their defense…"

1898 - In a speech at Kawit in Cavite province, Emilio F. Aguinaldo, President of the fledgling Philippine Republic, pleads with local officials to keep unity, peace, and upright conduct; the appeal comes amidst apprehensions expressed by Felipe Agoncillo and Apolinario Mabini, Aguinaldo's diplomatic official and key adviser, respectively, over the former's supposed "alliance" with the Americans, with some Filipino soldiers already thinking at that point they they might need to fight a war with the pale-skinned US forces.

Posted by Jesusa Bernardo at 2:30 AM No comments:

1900 - Gen. Isidoro Torres y Dayao, the politico-military chief of Bulacan province, receives from Gen. Emilio Aguinaldo y Famy, President of the Philippine Republic-on-the-run during the  Filipino-American War (1899-1914), a letter instructing him to adopt effective counter-measures against the imperialist American soldiers who make alluring offers to tempt the native soldiers to abandon the fight for the sovereignty of their motherland; during the inauguration of the Philippine Republic on January 23, 1899, Torres led a 6,000-strong army that marched during the historic parade, which occurred just under two weeks before the United States began its invasion of the Southeast Asian archipelago; earlier in the summer of 1897 during the second phase of the Philippine Revolution, with the US rather concurrently fighting a war against Spain,  American Admiral George Dewey forged an "alliance"  with Aguinaldo; such 'alliance,' however, would turn out to be a sinister deceptive ploy of the Bald Eagle nation that would soon renege on its military leaders' promises of honoring Philippine Independence, and even staging the infamous Mock Battle of Manila that would falsely make it appear that the Americans, instead of the Filipino revolutionaries, defeated the Spanish colonial forces in the archipelago and the capital, Manila, as prelude to the baseless December 1898 Treaty of Paris where by that time,  the virtually expelled Spaniards will supposedly "cede" the Philippines to imperialist America.

Photo credit: http://philippineamericanwar.webs.com/collapse1901.htm
Posted by Jesusa Bernardo at 2:30 AM No comments:

1898 - The Act proclaiming Philippine Independence is declared in Bacoor, Cavite  during the first convention of town/municipal  presidents that included representatives from Tanguay, Nueva Ecija, Laguna, Morong,  Pampanga, Manila, Tarlac, Bulacan, Batangas,  Bataan, Infanta, Union, Pangasinan, Zambales,  Tayabas, and Mindoro; ironically, as the act declares that the Philippine Revolution against Spain is a rational and legitimate action of the Filipino people who are valiantly defending their national pride and dignity, and asks all foreign governments to recognize the Filipino nation and its sovereignty, during the very same day, the troops of the imperialist United States earlier  freely allowed to enter the country (by a gullible Gen. Emilio F. Aguinaldo) are organized into a division commanded by Gen. Thomas Anderson a that, in about six months' time, will take part in the undemocratic American invasion of the Philippines and commence the bloody and protracted Philippine-American War (1899-1914); beginning some three months earlier during the start of the so-called second phase of the Philippine Revolution that intersected with the Spanish-American War , a succession of military and diplomatic Bald Eagle officials including Anderson himself  and Admiral George Dewey conned Aguinaldo in forging an alliance against Spain on the vilely false promise that the U.S. will honor Philippine Independence.

1944 - Manuel Luis Quezon, first President of the Commonwealth of the Philippines under the colonial occupation of the  imperialist United States, dies from tuberculosis at Saranac Lake, New York during World War II while the Southeast Asian country was under Japanese Occupation.
Posted by Jesusa Bernardo at 2:30 AM No comments: