1896 - Filipino patriot and polymath  Jose Protacio Mercado Rizal is executed in Bagumbayan, Manila by Spanish-officered, native manned squad before thousands of spectators colonial authorities for supposed rebellion, sedition, and conspiracy in connection with the outbreak of the Philippine Revolution of 1896; Rizal had aroused patriotic sentiments through his propaganda work and his books Noli Me Tangere and El  Filibusterismo that depicted the pathetic situation of the Filipinos under the colonizers; the Noli Me Tangere particularly earned the ire of the abusive friars who called it heretic, impious, injurious to the colonial government, and scandalous to the Catholic Church; Rizal was implicated in the Revolution owing to his association with members of the secret-society-turned-revolutionary-government Kagalanggalangang Katipunan nang manga Anak nang Bayan but he actually subsequently disowned the revolutionary movement based on how he chose to serve the colonial Mother Country as a volunteer medic in Cuba and on his manifesto condemning the 1896 revolution and the unauthorized use of his name. 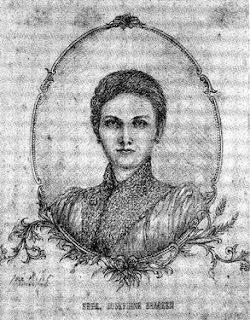 1896 - Josephine MacBride Bracken reunites with her lover, Filipino patriot and polymath Jose  Rizal just before the latter's execution by the Spanish colonial authorities; Bracken would hand over to Andres Bonifacio, the Supremo of the Kagalanggalangang Katipunan nang manga Anak nang Bayan, a copy of Rizal's "Mi Ultimo Adios" poem when she enters the rebels' territory in Cavite accompanied by Rizal's siblings, Paciano and  Trinidad; earlier, Bracken and Rizal could not get married because Rizal was a mason but two hours before Rizal's execution, the couple is married  under Catholic rites by Fr. Victor  Balaguer.


1953 - Ramon del Fierro Magsaysay, the  seventh officially recognized  President of the Philippines, takes  his oath of office in the grandstand  by Manila Bay; the former Defense  Secretary of his predecessor,  President Elpidio Quirino, Magsaysay's  candidacy would later be revealed to  have been backed up by the Central  Intelligence Agency (CIA) of the  imperialist United States of America,  with CIA operative David Sternberg  fronting as foreign correspondent but  assisting another operative, Gabriel  Kaplan, in managing Magsaysay's  presidential campaign; Magsaysay would  be endeared to the Filipino masses  mainly through his approachability,  including policy of opening the doors of Malacanang to the people, and  his simplicity.

Posted by Jesusa Bernardo at 11:59 AM