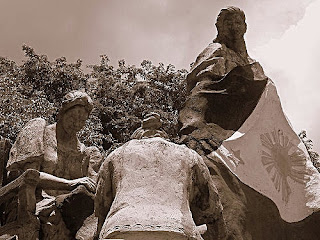 1879 - Delfina Herbosa y Rizal, future Filipina revolutionary and niece of patriot and polymath Jose Rizal, is born during the Spanish colonial times; Herbosa's family will suffer persecution from the colonial authorities because of her uncle's writings, primarily the Noli Me Tangere that will expose the abuses of the Spanish friars; she will join the women's chapter of the underground-society-turned-revolutionary-government Kagalanggalangang Katipunan nang  manga Anak nang  Bayan (KKK) where she will meet her future husband, Jose Salvador Natividad, both of whom will be involved together in various battles against the Spaniards; following the Pact of Biak-na-Bato truce, she and her husband will join the self-exile of revolutionary leaders in Hong Kong where Herbosa-Natividad will help Marcella Agoncillo sew the Philippine flag that will be unfurled on June 12, 1898 in Kawit, Cavite.

1896 - Filipino composer Jose Libornio y Sabas is appointed "Director General de las Bandas de Musicos del Ejercito" by the Supreme Government of Peru; disguising himself as a native of Cartagena, Spain, Libornio will become a hero in Peru after producing many different musical compositions that included the South American country's National Army March and a march dedicated to the Peruvian general; born to a teacher and embroideress in Sta. Ana, Manila during the Spanish colonial times, Libornio was given to and raised in a hospicio where he learned the flute after his father died; Libornio would later join the Colegio de Piples of the Manila Cathedral, study piano and violin, became a band member of the Spanish Infantry Regiment No. 7, and a Charini Circus musician before sailing for Honolulu, the United States, Mexico, and finally in Peru in 1895.

jose libornio is my great grandfather thanks

Jose Libornio is my great, great, grandfather. My grandfather on my mother's side is Francisco Libornio, himself a musician. He played the clarinet for the Manila Symphony Orchestra. My grandmother is Gavina Arcanghel Libornio. I am Ramoncito Libornio Mercader. We were born and grew up in Sta. Ana, Manila.
Thank you for posting and giving us the information. Love and Light.

he is my great great grand father. My Grandmother Purita Liwanag Ponce Enrile who herself is an accomplished singer and empresario is a granddaughter of the great maestro. Her daughters are Armida Siguion Reyna and Irma Potenciano both singers and a son Chito Ponce Enrile also a singer. a great great grand daughter is also a singer , plays the flute and vocal coach by the name of Belinda P.E. Achacoso and her Daughter Anna Achacoso Graham is likewise a singer and accomplished musician ..That makes six generations of musicians in the Libornio line

i am a great great grandson of the Maestro. My grand mother Purita Libornio Liwanag Ponce Enril is a granddaughter. Among her children three are singers namely Armida Siguion Reyna, Irma Potenciano (still teaching at the UST conservatory of music and Chito Ponce Enrile. A great great grandaughter Lindie E. Achacoso is a vocal coach and singer and plays the flute while her daughter Anna Achacoso Graham is likewise a singer and accomplished player of asian instruments, kulintang, gamelan and also plays the clarinet....That makes 6 generations of musician of the Libornio line.