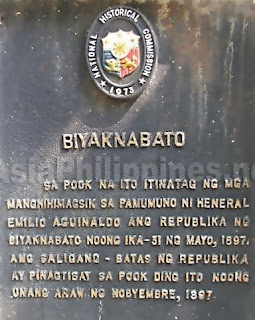 1897 - The Pact of Biyak-na-Bato, the truce between Spanish colonial forces and Filipino revolutionaries led by Gen. Emilio Aguinaldoy Famy, is signed on the conditions that the generals and Aguinaldo and his cabinet receive $400,000 and go on exile to Hongkong and on the part of the Spaniards, to institute reforms including the expulsion of the friars; the truce came as Aguinaldo's forces retreated to the mountainous area of San Miguel, Bulakan amidst a series of defeats suffered by the Filipino revolutionaries following the demoralization of Katipuneros who learned of Aguinaldo's power grab from, and execution, of the Supremo of the Philippine Revolution, Andres Bonifacio y de Castro, in May 1897; earlier, Bonifacio, leader/President of the underground society-turned-revolutionary-government Kataastaasang Kagalanggalangang Katipunan nang manga Anak nang Bayan,  issued the Acta de Tejeros and the Naic Military Agreement that accused the [unnamed] camp of Aguinaldo for the treasonous act of negotiating for truce with the enemy Spaniards and also nullified the Tejeros election and newfound authority of Aguinaldo's camp on grounds of fraud in the March Tejeros Convention polls respectively.


Raw Photo Credit: http://asiaphilippines.net/main.php?g2_itemId=13419
Posted by Jesusa Bernardo at 10:49 AM