1735 - A big tidal wave or 'tromba  marina' wipes out the town of Baler in  the future Quezon province in the  Philippine archipelago during the  American colonial period, with only 14  families surviving--the Angaras,  Bijasas, Bitongs, Lumasacs,  Carrasocos, and Pobletes; the early  inhabitants of Baler were the Ilongot  and Dumagat natives and during the  Spanish colonial period, was formed  into a municipality by the Franciscan  friars led by Fr. Francisco de San  Antonio in 1611. 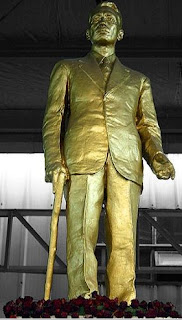 1875 - Juan Sumulong y Marquez, future  revolutionary and political Opposition  stalwart, is born in Antipolo, Rizal  during the Spanish colonial times; he would join the  Philippine Revolution against Spain while a law student at the University of  Santo Tomas, specifically joining with the revolutionaries based in Morong Province (today's Rizal); Sumulong, however, would early on collaborate with the new colonial American government by serving as private secretary to the civil governor of Morong even as the  Philippine-American War (1899-1914) rages on; he would become president of the Partido Nacional Progresista that would aim for gradual Philippine Independence and, later, of Democrata Party (merger party with Teodoro Sandiko's Artido Democrata Nacional); Sumulong, who would be described by nationalist solon Claro M. Recto as having "a high reputation for intellectual capacity and integrity," would be noted for being the "Brains of the Opposition" during the ascendancy of Manuel L. Quezon during the American colonial period.