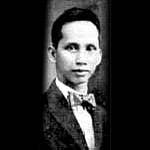 1894 - Antonio J. Molina, future Filipino national artist for music, is born to  a wealthy and influential government official, Juan Molina, in Quiapo,  Manila during the Spanish colonial times; Molina will earn his teacher's  diploma in violoncello from the Conservatory of music at the University of the Philippines and will emerge as an eminent violoncellist, composer, music administrator, conductor and teacher; he will perform in Vietnam from 1923-1924 where he will prominently figure, playing at  the Exclusive Societe Philharmonique de Hanoi, will teach at the University of the Philippines, become the first Filipino composer to be invited to perform his own works in Malacanang, and will conduct the very first concert aired in Philippine television; Molina will write over 500 musical compositions in his lifetime, receiving various citations and awards, including the 1973 National Artist Award and the Republic Cultural Heritage Award in 1965 and 1972.

1898 - The first and official raising of the Philippine flag in Mindanao island occurs in Surigao six months after the Declaration of Philippine Independence but more than three months after the infamous Mock Battle of Manila falsely made it appear that the Spanish colonizers in the Southeast Asian archipelago were defeated not by the Filipinos but by the imperialist Americans; while it will not become clear whether the flag-raising is sanctioned or not by the central government of Gen. Emilio F.Aguinaldo, what will be ascertained is that a provisional junta government headed by Alejandro Gomez is established in clear identification with the aims and struggles of the Philippine Revolution as news of Aguinaldo's establishment of a dictatorial government reached Filipino sympathizers to the revolution against Spain and as news of the defeat of the Spanish armada by the United States forced Spanish officials and friars to abandon their posts in Surigao.


Photo credit: http://en.wikipilipinas.org/index.php?title=Image:Antonio_Molina.jpeg
Posted by Jesusa Bernardo at 11:59 AM