1898 - The fledgling Philippine Republic government of Gen. Emilio F. Aguinaldo decrees December 30 as "a national day of mourning" and the anniversary of the death of patriot and polymath Jose Mercado Rizal; on December 30, 1896, Rizal was executed by the Spanish colonial government for supposed rebellion, sedition, and conspiracy as he was implicated in the secret-society-turned-revolutionary-government Kagalanggalangang Katipunan nang manga Anak nang Bayan despite the fact that he issued a manifesto disowning the Philippine Revolution of 1896; the decree comes some two weeks after the anomalous Treaty of Paris wherein imperialist United States supposedly bought the Philippines for $20 million dollars and some five weeks before the bloody and protracted Filipino-American War (1899-1914).

1898 - Tomas S. Fonacier, future  outstanding Filipino historian and  educator who would be responsible for  founding the University of the  Philippines Iloilo College, is born in  Laoag, Ilocos Norter; as historian,  Fonacier would be noted for "The  Filipino Racial Memory" (1958), "The  Chinese in the Philippines During the  American Regime (1933); "Gregorio Aglipay y Labayan" (short biography  published in 1954); and "The Ilocano  Movement" (1953). 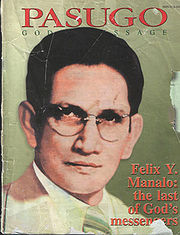 1918 - Felix Manalo y Ysagun, Filipino founder of the Iglesia ni Cristo (INC), is honored as an outstanding evengelist by the ministers of the Christian mission, some four years after founding his own church, the INC; Manalo went through a razzle-dazzle period of soul-searching--joining the Philippine Independent Church, then Colorum, the Methodist Episcopalian Church, and then the Seventh Day Adventist--before eventually finding his spiritual truth in his church; in 1922 during the  period wherein he would be accused of  immorality (for supposedly  raping/molesting 30 or so women  members of INC), Manalo would  introduce in his church the important  Sugo doctrine claiming that he is the  messenger of God, the fifth angle of  Revelation.

1928 - Future Filipino senator and advocate of Muslim political autonomy, Mamintal Tamano, is born in Tampacan, Lanao; a member of the Maranao tribe, Tamano would envision the process of national integration, including Muslim integration, as a way to achieve unity in diversity in the Philippine archipelago; Tamano, who would be noted for being a Muslim senator with the longest time in office, would become a member of the Upper House before and after Martial Law--from 1969-1972 and 1987-1992--and would principally author Republic Act 6848 providing for the Al-Amanah Islamic Investment Bank's charter, as well as RA 6969 that bans the importation, transportation, disposal, and sale of toxic and nuclear wastes.