1805 - Colonial Philippines' governor for  Zamboanga, Francisco Bayot, concludes a treaty  of peace with Mohamad Ali Mudin, sultan of  Jolo, during the Spanish era; the treaty, which  was in keeping with the policy of colonial  propriety governor Gonzalez Aguilar of  delegating warfare with the Moros [and  agreements] to the provincial authorities under  the colonial central government's aid and  directions, involved the agreement that the sultan prohibits foreigners from residing in his  dominions without prior consent of the Spanish  government, and in case of war, to close his  port to the enemies of Spain. 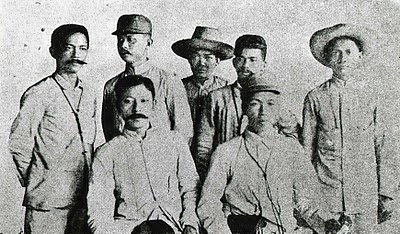 1897 - Filipino revolutionary head Emilio Aguinaldo authorizes Pedro A. Paterno "to enter into harmonious relations" with the colonial Spanish government they were supposed to be fighting against during the Philippine Revolution; the development comes following the retreat of Aguinaldo's generals to the mountainous town of Biak-na-Bato in Bulacan as Cavite, where  his "so-called central  government" was based, succumbed to the Spanish forces as the revolutionary fervor was smothered by Aguinaldo's power grab against, and execution, of revolutionary leader Andres Bonifacio in May that year, with "many  [revolutionaries] from Manila, Laguna and Batangas, who were fighting for the province (of Cavite), [having been] demoralized"; Paterno, who was a "purely volunteer mediator," without official standing and who had offered himself to the olonial Gov-Gen. Primo de Rivera as negotiator, was bestowed with full powers by Aguinaldo with " to determine, fix, and receive the total sum of funds or values which the Spanish government will grant us."