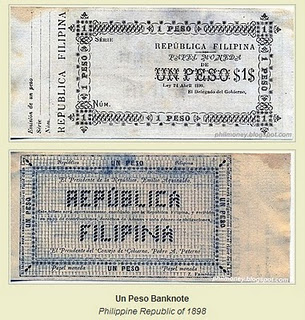 1899 - The Philippine province town of Vigan, Ilocos province is captured by the invading enemy Americans under Lieutenant-Commander MCrackin's  Oregon landing forces more than nine months into the bloody and protracted Filipino-American War (1899-1914); a month and 2 weeks earlier, the imperialist United States decided to launch a major offensive in its wicked war of invasion against the fledgling Philippine Republic; the Americans had earlier conned Gen. Emilio Aguinaldo y Famy, the native revolutionary leader, into believing that they were the Filipinos' allies in the war of independence against Spain, which made Aguinaldo stupidly allow the infamous Mock
Battle of Manila that falsely showed to the world that it is the Bald Eagle soldiers and not the Philippine force that have defeated the colonial Spaniards in the Southeast Asian archipelago.

1898 - The fledgling Philippine Republic is authorized to issue paper money in the amount of three million pesos,  redeemable in three years; the authorization is issued by  the Malolos Congress that opened in September this year  amidst Gen. Emilio F. Aguinaldo's earlier Declaration of   Philippine Independence and imperialist American  posturing to invade the new Southeast Asian nation; the  Aguinaldo government will issue peso banknotes with the  text "Republica Filipina Papel Moneda de Un Peso" on  obverse, along with copper coins.

Posted by Jesusa Bernardo at 7:05 AM