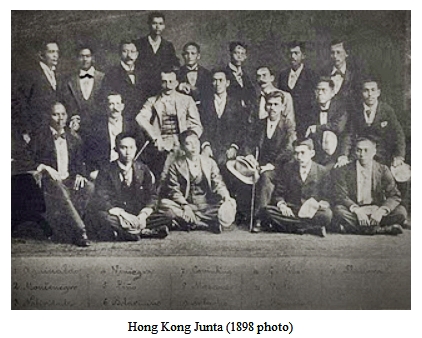 1900 - One year and nine months into the Philippine  American War (1899-1914), imperialist Lt.-Col.  John Mallory suggests that the United States  government suppress the Hongkong Committee by  making representations with the Hongkong  government; the Hongkong Committee/Junta, which is traced to the "Filipino Revolutionary Committee" based in Hong Kong that was formed in response to the call of Kagalanggalangang Katipunan  nang  manga Anak nang  Bayan (KKK) Supremo Andres Bonifacio y de Castro's call for Revolution, has evolved to mainly engage in procuring ordinance for the revolutionary soldiers following the Pact of Biak-na-Bato; the Hongkong Junta later served as the representative of Emilo Aguinaldo's government with the Spaniards in the negotiations to secure Filipinos' support in the Spanish-American War before leaning over to ally with the U.S.; as America revealed its vile true intention of invading the Philippines, the Hong Kong Committee began expanding its composition to strengthen its funds and arms acquisition campaign and propaganda efforts, including international recognition of Filipino independence.


Photo credit: http://www.filipinoforum.net/phpBB3/viewtopic.php?f=5&t=4992
Posted by Jesusa Bernardo at 6:50 AM