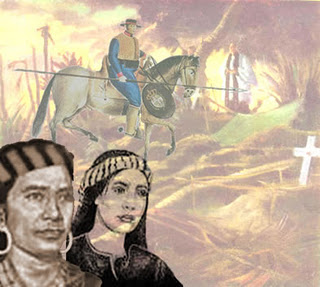 1762 - The Ilokos Revolt begins under the  leadership of Diego Silang y Andaya in the  northern part of the Philippine archipelago  during the Spanish colonial times; Silang would  lead his people in the Ilokos province to a  short-lived liberation from colonial oppression,  including high taxes and forced labor, declaring  his Ilokano people independent exactly within a  month and making Vigan the capital of the Free Ilocos; most unfortunately, Silang would die  under the hands of traitor assassins hired by  colonial Spaniards--his erstwhile friends,  Miguel  Vico, a mestizo, with help from Captain Pedro  Becbec, who will shoot him at the back with a  muskey six months later; Silang's wife, Maria Josefa Gabriela, of Ilocano-Itneg parentage, would continue the fight for freedom of the Ilocanos.

1875 - Gregorio del Pilar y Sempio, future  Filipino revolutionary general and Philippine-American War (1899-1914), hero, is born in San Jose,  Bulakan, Bulakan; he assisted his uncle, Marcelo  H. Del Pilar, in his great propaganda work  against the abuses of the Spanish friars and  when the Philippine Revolution against Spain  broke out in 1896, Gregorio or "Goyo"  volunteered for military service through Col.  Vicente Enriquez; one of the youngest generals, del Pilar would be known as the "Hero of Tirad  Pass" during the Fil-Am War, fighting the enemy  Bald Eagle soldiers to his last breathe in the bid  to enable the escape of his President, Gen.  Emilio F. Aguinaldo of the Philippine  Republic-under-imperialist-siege.

1897 - "Purely volunteer" Filipino mediator Pedro  A. Paterno communicates to the  Spanish  governor-general Primo de Rivera that the leader  of the Filipino revolutionary movement, Gen.  Emilio Aguinaldo y Famy, has accepted the  Spanish proposal of amnesty; to forge the  amnesty pact, Paterno, who did not join the  Philippine Revolution of 1896 but was appointed one of the framers of Aguinaldo's  short-lived Malolos Constitution, has shuttled  between Manila and Biyak-na-Bato; the rocky mountainous town of Biyak na Bato in Bulakan  province was where the revolutionary forces retreated to after a series of defeats following the demoralization of many Katipuneros as news  of Aguinaldo's power grab from, and execution, of the instigator of the Revolution, Andres Bonifacio y de Castro, spread in  mid-1897.


Photo credit: http://www.focus-philippines.de/silang.htm
Posted by Jesusa Bernardo at 7:45 AM