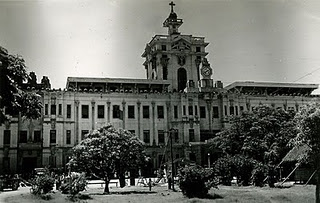 1623 - Spanish King Charles V confirms the permission  granted the Dominican friars by the governor and  archbishop of the colony, the Philippines, as to the  establishment of a college in Manila (what would be the University of Santo Tomas), several decades after colonial settlements were first built in  the Southeast Asian archipelago; the college originally organized as the Colegio de Nuestra Senora del Santisimo Rosario in 1611 would become the University of Santo Tomas following the issuance of a Papal bull by Pose Innocent X; the college would be the only Royal and Pontifical University in Asia, as well as the oldest outside in Asia and even older than the Harvard University in North America.

Posted by Jesusa Bernardo at 6:45 AM