1762 - British colonial forces capture Pasig a  month after the surrender of Manila by the  Spaniards led by acting governor-general Archbishop Manual Antonio Rojo; some four  days earlier, the British authorities that at that  point occupied Manila and Cavite, which lie  along the harbor, issued a proclamation  granting Filipino residents with rights enjoyed  by other subjects of the British crown; Britain's  occupation came amidst the Seven Years War  between the two European powers. 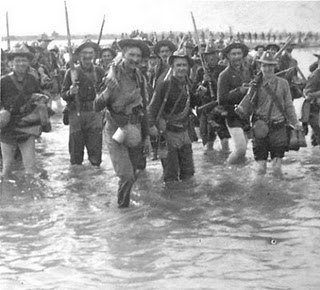 1899 - San Jose, Nueva Ecija is captured by enemy American invaders apparently without resistance  nine months into the bloody and protracted Philippine-American War (1899-1914); the capture comes nearly a month after the imperialist United States forces started a major offensive that involved the influx of troops in  the bid to invade the Southeast Asian archipelago, with Philippine President Emilio Aguinaldo y Famy going into hiding and further retreating northwards; the Filipino freedom fighters in much of Luzon and also the Visayas and Mindanao islands would later stage guerilla-style defense of their motherland against the imperialist Bald Eagle for well over a decade.

Photo credit: http://www.freewebs.com/philippineamericanwar/thewarin19001901.htm
Posted by Jesusa Bernardo at 8:00 AM