1777 - A colonial Spanish decree recommends than an institution for confining vagrants and  dissolute persons be established in the  Philippines, some 200 years into Spain's  colonization of the Southeast Asian archipelago;  around  69 years later, colonial Spain would issue an  anti-vagrancy law that would include the  one-month employment of the idlers in public  works before being sent back to their  hometowns. 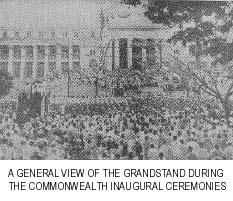 1935 - The American colonial-era Commonwealth  of the Philippine is inaugurated with Manuel L.  Quezon as President of the Philippines and  Sergio Osmeña, Sr., as Vice-President; Quezon prevailed over presidential rival Emilio F. Aguinaldo, the former being the ayuda-de-campo of the latter during the Philippine-American War (1899-1914), apparently over the issue of Aguinaldo's power grab from, and execution of, the original leader of the Philippine Revolution, Andres Bonifacio y de Castro; prior to the inauguration, the Philippines had an insular colonial government, a kind of territorial colonial government that reported to the United State Bureau of Insular Affairs beginning about 1901 when the imperialist Americans began to establish themselves into the islands but the Filipino-American War still raging, mostly guerrilla-style from the end of the Filipino freedom fighters.

Posted by Jesusa Bernardo at 7:27 AM