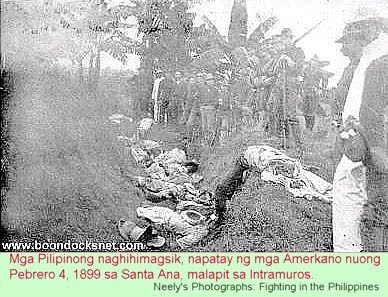 1899 - The Philippine-American War is begun by a United States sentry who shoots and kills a Filipino soldier who makes an attempt to cross the bridge in Sta. Mesa; "the first Filipino fatality of the war is Corporal Anastacio Felix of the 4th Company, Morong Battalion under Captain Serapio Narvaez. The battalion commander is Col. Luciano San Miguel."

1969 - Yasser Arafat is named chairman of the Palestinian Liberation Organization (PLO), which was formed in 1964 as an umbrella organization meant to centralize leadership of various scattered Palestinian groups that had formerly existed as clandestine resistance entities; Arafat organized the PLO and began launching guerrilla attacks against Israeli targets, initially from its Jordan bases.

1973 - International peace inspection teams are sent into the Vietnam countryside to observe the implementation and progress of the truce signed days earlier by the Vietcong, North Vietnam, South Vietnam, and the United States in Paris, France; fighting will actually continue, although in decreased intensity until the time Saigon falls, signaling the end of the Vietnam War.

1998 - A strong earthquake hits Afghanistan, killing at least 4,000 people; despite the calamity, fighting in the ongoing civil war will continue between forces of the fundamentalist Islamic Taliban government and Northern Alliance rebels.