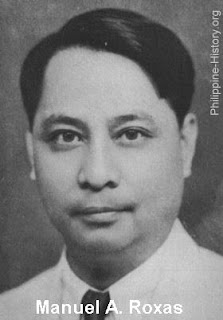 1945 - Manuel Roxas y Acuna is elected President of the Senate during a special session of Congress called by President Sergio Osmena y Suico following the defeat of the Japanese and the end of World War II but with the Philippines still a colony of the United States; this early, Roxas already has set his on the sights on the presidency, with American Gen. Douglas MacArthur and High Commissioner Paul V. McNutt supporting him, and in the elections of 1946,  will win amidst Osmena's refusal to campaign; following the granting of Philippine "independence" in 1946, Roxas would be responsible for the neocolonial arrangement of the Philippines and  the imperialist Bald Eagle nation, with the lopsided and inimical-to-Filipino-interests RP-US Military Bases Agreement (MBA) and so-called Parity Rights to be successfully pushed by his administration; the MBA will grant  American access to 22 military, naval, and air bases in the  Southeast Asian nation, with Roxas lobbying for its passage in the Philippine Congress despite the MBA despite being a mere international executive agreement on the American side, not having been ratified by the U.S. legislature; on the other hand, the  Parity Rights amendment to the 1935 Constitution will ridiculously give American citizens the same equal rights as Filipinos to exploit the natural resources of the country.

Posted by Jesusa Bernardo at 8:47 AM