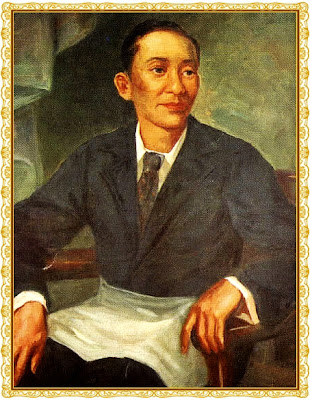 1900 - Sixteen months into the bloody and protracted Filipino-American War  (1899-1914) but after  the invading imperialist United States forces have arrested  some key people of the fledgling Philippine Republic, Gen. Arthur McArthur, the assigned American 'military ruler,' offers former Philippine Prime Minister Apolinario Mabini y Maranan amnesty  in exchange for swearing fealty to the Bald Eagle flag;  Mabini, considered as the "Brains of the [second phase of]  the Revolution," was jailed for being "a most active agitator" [translation: patriot] and persistently and defiantly refusing  amnesty, and maintaining correspondence with insurgents  [translation: defenders of the Philippine Republic]; even  when Mabini will finally take his oath of allegiance to the US in 1903 after two  years of being exiled to Guam in his yearning to return to his homeland shortly before his death from illness, Mabini will supposedly resume his patriotic work of agitating for independence; it is in exile that Mabini will write "The Philippine Revolution" based on his memoirs of the Himagsikan against Spain, including the part of the "crime" of the "assassination" of the Supreme President of the underground-society-turned-revolutionary-government  Kataastaasang Kagalanggalangang Katipunan nang manga Anak nang Bayan  Andres Bonifacio y de Castro on orders of Gen. Emilio Aguinaldo y Famy under whose presidency Mabini served as key adviser and Prime Minister.


Posted by Jesusa Bernardo at 8:59 AM