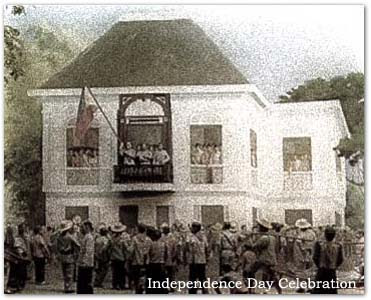 1898 - Gen. Emilio Aguinaldo y Famy, leader of the second phase of the Philippine Revolution against Spain, proclaims the Independence of the Philippines "under the protection of the Powerful and Humanitarian Nation," that is the United States of America and thereby ceasing "to have any allegiance to the Crown of Spain" and unfurling a blue, red and yellow flag partly inspired by the Stars-and Stripes banner of the imperialist United States; ironically, within eight months, the Bald Eagle nation will show the pathetically deceived Aguinaldo its true color as it invades the fledgling Southeast Asian republic by instigating the hostilities with the Filipino troops under a vile pre-arranged plan on February 4, 1899, of which the resulting savage Filipino-American War (1899-1914) will last for a bloody ten years or so.