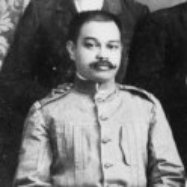 1898 - Gen. Antonio Luna, an effective leader of the Philippine forces against the invading imperialist Bald Eagle forces during the Filipino-American War (1899-1914),, is assassinated by bodyguards of President Emilio Aguinaldo at the stairs of the convent of Cabanatuan in the province of Nueva Ecija; the guilt for the murders (Luna's aide-de-camp was also killed) is widely ascribed to Aguinaldo because he summoned Luna to Cabanatuan with a signed telegram calling him to a conference and because during the murder, Aguinaldo's mother looked out the window and asked: Is he still breathing?"

Posted by Jesusa Bernardo at 6:39 AM

The blood of Luna, the most effective filipino general of his time, is in the heart of Aguinaldo.

"Just three months since the start of the Phil-Am War, Aguinaldo had another valiant revolutionary killed, Gen. Antonio Luna.

The assassination of this very effective military strategist on June 1899 appears to confirm the theory that Aguinaldo had Bonifacio eliminated for no other reason than for him and his elitist group to take over the leadership of the Katipunan. According to Juan Nakpil:

"(D)riven by his patriotic fervor, he (General Antonio Luna) did not conceal his desire to be the head of the cabinet with the portfolio of war to prevent the autonomists or pacifists from controlling the government of the republic....

When General A. Luna was dastardly assassinated on the stairs of the Convent of Kabanatuan and already fallen on the ground, the mother of Emilio Aguinaldo looked out the window and asked: "Ano, humihinga pa ba?" (Is he still breathing?)."

The Devaluation of a Hero & Promotion of a Counter-Hero: Where's Andres Bonifacio in the 5 Peso Coin? Make it P2.00. [Bonifacio series III]