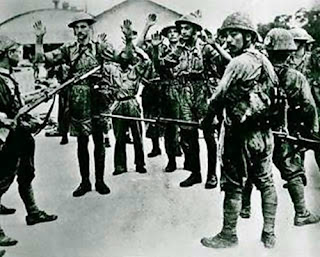 1941 - Japanese planes attack United States  military installations in Pearl Harbor and in Baguio, Davao, and Clark Field in the American colony, the  Philippines, thus leading to the Pacific Theatre of World War II; the Japanese will later land in Pangasinan and head towards Manila, with the  colonial Commonwealth government leaders President Manuel Luis Quezon y Molina and Vice-President Sergio Osmena y Suico evacuating to Corregidor fortress in Bataan, and later be further evacuating to the Visayan Islands and then to Mindanao from which point they will be finally picked up by U.S. B-17 bombers to fly  them to Australia for later transfer to Washington.

Posted by Jesusa Bernardo at 6:42 AM

Hi! Your blog is superbly good! I've been wanting to have posts like these on mine at http://thebrownmandiary.blogspot.com. Ang galing mo! Keep it up!