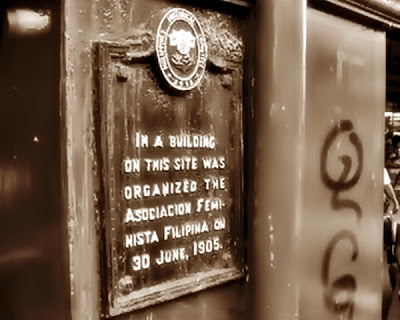 Woman Suffrage Bill in the United States colony, the Philippine Islands, even when Filipinas already exercised that right during the secret-society-turned-revolutionary-government Kagalanggalangang Katipunan nang manga Anak nang Bayan  revolutionary government some four decades earlier during the Himagsikan against Spanish colonial rule; later, the 1935 colonial Constitution of the Philippines will stipulate that the Filipina women be given the suffrage only if at least 300,000 women approve it and as it turned out, 447,725 women voted yes in the earlier 1937 referendum following the successful pro-suffrage campaign of the General Council of Women; the Bald Eagle nation itself, quite contrary to being a supposed bastion of democracy, gave the American women the right to vote in August 1920, some half a century after it first gave African-American men the suffrage right.

Posted by Jesusa Bernardo at 7:04 AM