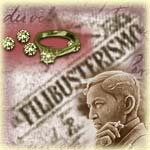 1891 - Jose Mercado Rizal, Filipino propagandist, patriot and  polymath, publishes in Ghent, Belgium "El  Filibusterismo" (The Subversive or Reign of Greed),  his second novel serving as a political treatise that  exposes the evils of the Spanish colonial government  and church authorities; along with the earlier novel  "Noli Me Tangere" (Touch Me Not), El Filibusterismo will anger the Spanish colonial elites and some of the  hispanized Filipinos due to their insulting symbolism,  leading to his prosecution as supposed inciter of the Philippine Revolution (to be led by an admiring revolutionary, Andres Bonifacio y de Castro  who will power the secret society that will turn into a revolutionary government, the Kagalanggalangang Katipunan nang  manga Anak nang Bayan) that will break out in August 1896 and, eventually,  Rizal's military trial and execution in  December 1896.

http://ako-ay-pilipino.blogspot.com/2009/07/buod-ng-el-filibusterismo.html
Posted by Jesusa Bernardo at 9:00 AM