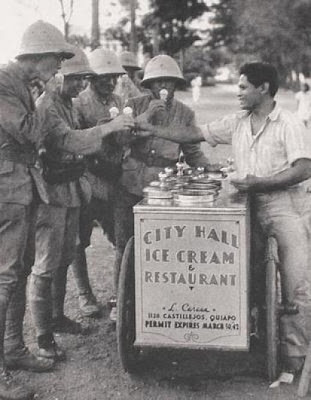 1943 - Lt. Gen. Sizuiti Tanaka, the highest Commander of the Japanese Imperial Army in the Philippines, gives instructions during the First Anniversary of the Fall of Corregidor and Peace and Order Day at Luneta, Manila; Tanaka hails the Fall of Corregidor during World War II as  "a momentous date in Philippine history because it stands for the end of the 40 odd years of American domination and the birthday of the New Philippines," claiming that 18 million Filipinos stand united in marking "the great day with jubilation and thanksgiving or their happy deliverance from the age-long tentacles of Western imperialism"; Tanaka highlights the military, spiritual, and economic ties of the Oriental people under the Co-Prosperity Sphere while castigating Anglo-American imperialism:

To all of us in the East, the Fall of Corregidor is significant because it represents the final expulsion and decisive uprooting of Anglo-American power and influence from the sacred soil of the Orient. For the Philippines, this day is significantly a day of great rejoicing because it marks the first progressive stage in your march towards the goal of independence. Your complete liberation from American influence and domination in political, economic, and spiritual existence could never have been accomplished so thoroughly or so speedily except by the armed intervention of the Japanese Empire. This is the basic reason for the sincere and overwhelming jubilation permeating thruout [sic] the Philippines today and the basis of the increasing understanding and collaboration between and among the Japanese and Filipinos in pursuit of their common cause.