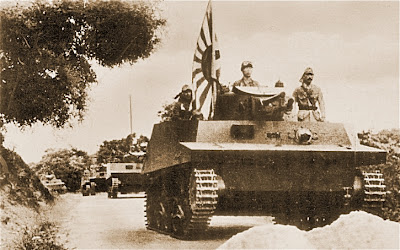 1943 - The Director-General of the Japanese Military Administration of the Philippines during World War II congratulates the graduating class of the Institute  for Former [Filipino] USAFF, or United States Army Forces in the Far East; the Director-General urges the graduates of a  cultural training and spiritual reorientation course to play active roles in reconstructing and regenerating their native country and further asks them to strive for the benefit and welfare of their countrymen; Japan earlier invaded the Philippines, which has been a colony of the imperialist Unites States for some four (4) decades., during their so-called December 1941-May 1942 Philippine Campaign, with the  numerically superior defenders able to hold out for months but still succumbing to the Japanese might as part of the Pacific theatre of World War II.


Raw photo credit: http://www.akiraifukube.org/japanese_army.jpg
Posted by Jesusa Bernardo at 8:59 AM