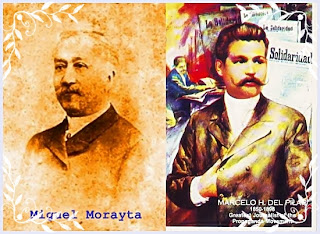 1889 - The Associacion Hispano-Filipina, a non-partisan organization composed of Filipinos and Spaniards and aimed at securing reforms for  colonial Philippines is inaugurated in Madrid; prominent Filipino reformists Marcelo H. del Pilar and Mariano Ponce are among its officers led by Miguel Morayta as president and Felipe de la Corta as vice-president; the first steps towards its formation seems to have begun in July 1888 when some Filipinos joined up with a handful of peninsular Spaniards in order "to work for the material and moral improvement  of the Philippine Archipelago"; some of its early objectives included obligatory teaching of the Spanish language in all schools in the country and suspension of flogging in prisons and justice courts; del Pilar, who is a friend of Morayta, would figure in the efficacy of the Asociacion by way of the Masonic ties he forged through the lodge Solidaridad, as seen in how the association managed to muster some 7,000 signatures for the petition that the Cortes favor Philippine representation.

1903 - The return from exile of Apolinario Mabini y Maranan, former  Philippine Prime Minister, is opposed by colonial American civil governor William Howard Taft who writes to the War Department of the imperialist United States asking that the former be demanded to swear allegiance to the Bald Eagle  flag; Mabini, dubbed the "Brains of the [second phase] of the Revolution"  against Spain was exiled, along with other captured Filipino officials, when they refused to swear loyalty to the imperialist United States during  the early phase of the bloody and protracted Filipino-American War (1899-1914); Mabini, a paralytic, was forced to take his oath of allegiance to the enemy invaders because of his ill health but will supposedly resume his agitation for Philippine independence; Mabini will die in May 1903, less than three weeks after his return to his beloved homeland.

Posted by Jesusa Bernardo at 12:58 PM