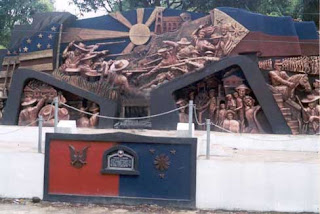 1900 - The Battle of Mabitac that spelled victory for  the Filipino freedom fighters against the imperialist  American invaders takes place in Laguna one and  one-half years into the protracted  Philippine-American War (1899-1914);  Cailles, acting operations  chief in the first zone of Manila, had earlier defiantly raised the Filipino flag in the headquarters he  established at Santa Cruz, Laguna from where he  directed operations against the enemy under Gen.  Henry Lawton; using guerrilla tactics and mastery of  the terrain, Filipino Gen. Juan Cailles leads the  native soldiers in routing the militarily superior  American forces commanded by Col. Benjamin F.  Cheatahm, Jr.

1871 - Filipino revolutionary Gen. Francisco  Macabulos, future liberator of Tarlac province during  the Philippine Revolution against Spain, is born in La  Paz, Tarlac; Macabulos will  not go to Hong Kong to  take part in the Biak-na-Bato Peace Pact momentarily  forged by Hen. Emilio Aguinaldo  with the Spanish  colonial authorities and, instead, will form the  Provisional Revolutionary Government of Central  Luzon covering Nueva Ecija, Zambales, La Union,  Pangasinan, and the Ilocos Region, with its own  Constitution; unfortunately, Makabulos will not deem  it worthy to fight the new colonizers, the imperialist  United States and, thus, will early on capitulate to the enemy Gen. Douglas McArthur in June 1900, one year and four  months into the  protracted Philippine-American War  (1899-1914).


Photo credit: http://www.laguna-tourism.techcellar.net/paper-mache-at-pakil/
Posted by Jesusa Bernardo at 8:59 AM

I am thankful that I can find a blog like this a historical information. This is also a refreshing on mind of what the Filipino Heroes did for fighting their country and it is really amazing. Thanks for sharing this wonderful info.