1606 - The first Chinese (Filipino) uprising takes place during the early decades of the Spanish colonial rule of  the Philippine archipelago; days earlier, the Chinese had gathered in Tondo and Binondo and on this day,  St. Francis' Day to Catholics, the Chinese battle the Spanish soldiers but will be slaughtered by the thousands by forces that include Kapampangan and Japanese conscripts; the leaders of the parian uprising will later be identified and executed in Manila, with survivors escaping to the provinces, and with a Spanish ambassador to be later dispatched to Guangzhou, China to communicate officially the bloody insurrection in the Southeast Asian colony in the months of October and November 1603. 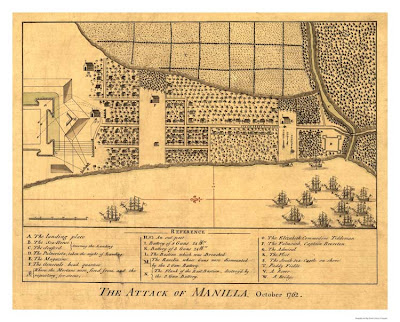 1762 - At dawn, Francisco Manalastas from Pampanga  province leads a force of Filipinos to assault the  British trenches in Manila during the brief British Occupation of the Philippines (1762-1764) during the  Spanish colonial rule; some 200 British soldiers will be  killed but Archbishop Antonio Rojo will convene the  Council of War to decide on the issue of whether to surrender or continue the apparently hopeless struggle  against the British forces; Britain will go on to occupy and rule Manila and Cavite, being on Manila Bay,  administering it as a de facto colony with the Spaniards retreating to the interior,  until April 1764 when the 1763 Treaty of Paris would the so-called  Seven Years War although a British force would actually remain on the Sulu islands until 1773.

1900- Two years and 8 months into the  Filipino-American War (1899-1914), Apolinario Mabini y Maranan,  former Prime Minister and key adviser of the fledgling Philippine Republic, is released upon orders of the  imperialist American authorities; dubbed the "Brains  of the Revolution," Mabini was earlier captured by enemy American soldiers in Cuyapo, Nueva Ecja in  December 1899 and imprisoned at the Anda jail, and would go on to live destitute and unemployed in Nagtahan; the patriot and philosopher would later be exiled in 1901 along with other officers of the Philippine  Republic, to Guam following his refusal to swear allegiance to the invading Bald Eagle flag.


Photo credit: http://www.britishempire.co.uk/maproom/philippines.htm
Posted by Jesusa Bernardo at 8:11 AM