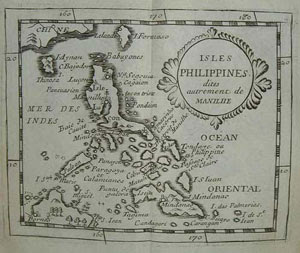 1578 - Francesco de Sande, the third Spanish colonial  governor of the Philippines, writes King Philip II a brief  report about his March-May 1578 expedition from Manila to  the southern island of Borneo in the bid to secure the submission of the natives to the Spanish crown; de Sande,  who earlier established the southern Luzon city of Nueva Caceres, enabling the arrival of the first Franciscan priests  in 1577 in the Southeast Asian archipelago, also requests the king for a reward and promotion for his victorious campaign against the early native Muslims as a result of which the Bornean sultan became submissive to Spain; earlier in 1521, Spain "discovered" [translation: first learned about] the islands of what they would later call the Southeast Asian archipelago following Spain's "discovery" [again, read: first learned about] what they will later name s the Philippine islands (Islas de San Lazaro) following the arrival of the ill-fated  expedition of Ferdinand Magellan in 1521 who was killed by chieftain Lapu-Lapu and some 22 years later, the fourth Spanish colonial expedition, this time headed by  Ruy Lopez de Villalobos, reached Baganga Bay, Davao Oriental in the island of Mindanao, Philippine archipelago; another expedition  in 1559 marked the beginning of the Spanish colonization of the Philippines when King Philip II sent a mission to conquer said islands that would later be named after him; earlier, the Spanish monarchy was convinced  that the Philippine islands formed part of the Spanish zone under the so-called Treaty of Tordesillas demarcation, leading to the full decision to colonize the islands and the native people.


Photo credit: http://www.chrispforr.net/row2/chrisphil7/neocolonial/neocolonial.htm
Posted by Jesusa Bernardo at 2:30 AM