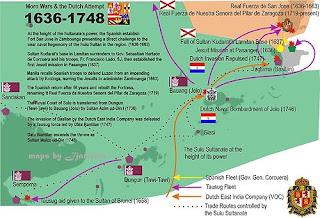 1645 - Native Muslims attack the Spanish garrison with help from a Dutch squadron that arrives at Jolo from  Batavia (North Jakarta) during Spain's colonial rule  of the Philippines; the Filipino-Spanish troops under  Commander Esteban Ugalde will resist and finally force  the withdrawal of the squadron after three days of  combat in what would be  one of the few unsuccessful  attempts of the Dutch to expel the Spaniards from the  Philippine islands; the contexts are Spain's tenuous hold on Mindanao and  the so-called 80 Years War of  Netherlands' revolt and, subsequently, assertion of its  independence; Spain's colonization of the Southeast Asian islands began in the mid 1500s when King Philip II sent sent an expedition to conquer said archipelago in 1559 following earlier exploration missions including that led by Ferdinand Magellan who was killed by the native chieftain Lapu-Lapu and his forces in the island of Mactan.


Posted by Jesusa Bernardo at 2:30 AM