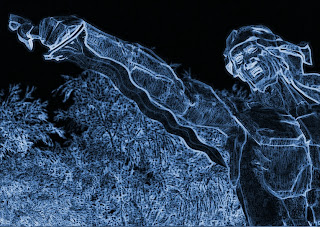 1571 - Philippine tribal chief Rahaj Sulayman belatedly appears before Spanish conquistadore Miguel Lopez de Legazpi to make peace folllowing the Second Conquest of Manila; following a short period of peace and after prodding by other tribes outside Manila, Rajah Sulayman (if not another ["Torik"] Sulayman) would later lead thousands of warriors from Manila, Bulacan, and Pampanga in the fierce but failed battle against the formidably armed colonizing Castillians, the Battle of Bangkusay; nearly exactly a year earlier in May 1570, Sulayman waged a battle against the Spaniards even as other kingdoms accepted the foreigners when he learned that "friendship" with the pale-skinned foreigners meant vassalage; while this initial (Filipino) battle for freedom was unsuccessful, they nonetheless gave a hard time to the more equipped forces of the Spanish invaders, thanks to the superior-quality cannons Sulayman had commissioned from Panday Pira, a blacksmith from the archipelago's southern islands.