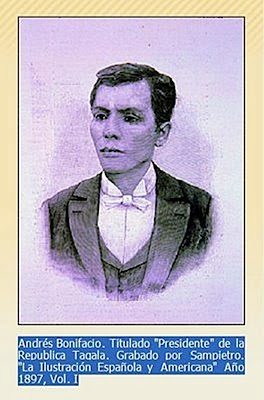 1896 - Andres Bonifacio y de Castro and other co-founders and leaders of the underground society aiming to liberate the Philippines from Spanish colonial rule, Kataastaasang Kagalanggalangang Katipunan nang manga Anak nang Bayan,  secretly meet at Ugong in Morong Province to plot moves on a planned uprising against the colonzers;  the motion of Dr. Pio Valenzuela to solicit contributions for the purchase of arms and munitions from Japan in the intent of carrying out the revolution the earliest time possible is approved by the Katipunan body on the condition that if first be presented for approval to acclaimed reformist leader and polymath Jose Rizal who is exiled in Dapitan; the decision to consult or enlist the support of Rizal if and when the revolution breaks out, is followed by the

appointment of Valenzuela, regarded as the most highly educated among the Katipuneros,  as emissary for the mission; Valenzuela, traveling under the assumed name Procopio Bonifacio, along with prospective Rizal patient, the blind Raymundo Mata, and a Rufino Magos, will board the ship Venus one and a half months later and confer with Rizal who will advise as to the need to first win over the wealthy Filipinos to the cause of the Himagsikan.