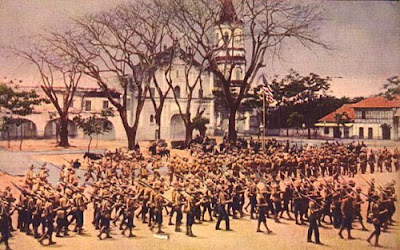 1899 - Malolos, the capital of the fledgling Philippine Republic, falls to the imperialist American forces led by General Arthur MacArthur more than two months into the bloody and protracted Filipino-American War (1899-1914), thus forcing President Emilio F. Aguinaldo to transfer the capital northwards to Tarlac; American's sickening sense of racial superiority is seen today in explaining US moves towards the invasion of the Southeast Asian archipelago, as reflected in the diary of Sgt. Hiram Harlow, an American soldier who sees action in  several battles in Malolos, with his multiple referral to the Filipinos as "niggers."

Posted by Jesusa Bernardo at 8:58 AM